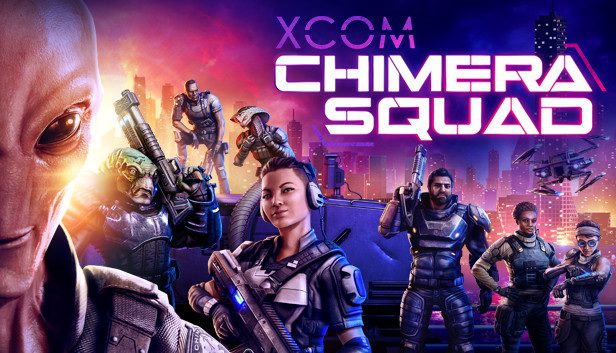 Chimera Squad is a smaller, easier, buggier entry to the series which tries out something different. It was 50% off before it even launched, presumably to get people to give it a chance and I'm glad I did, although I hope it isn't the direction that XCOM 3 takes. Being smaller & simpler in every way compared to it's predecessors is good & bad; it's easier to get into & play in small doses, but gets repetitive quickly. If you're a fan of XCOM or tactics games I would recommend it, although only once they've made it more stable; I don't appreciate having my time wasted with lost save games.

// Pros
+ Graphically well optimised
+ Can now rotate the camera at 45 degree intervals instead of 90 without a mod
+ Weapon mods can be removed and re-used
+ There are unique / epic weapons you can recover
+ Units can't die (they can, but you fail the game if they do and reload), which is far preferable to a unit dying and setting you back hours of progress in a 50 hour campaign
+ Bashing enemies in the head to knock them unconcious is great fun
+ Breaching in in slow motion is cool, although it does basically just give you a free go
+ You can now move & rotate the camera during the enemy turn (small annoyance from XCOM2)

// Cons
- Dialogue between squad mates gives them personality, but they're too happy-go-lucky and it doesn't fit at all with how XCOM's been portrayed so far
- You alternate turns with the enemy on a per-unit basis instead of the whole squad. This is an interesting approach, but effectively just limits your options to "shoot the next enemy on the list"
- Can't rename squad members (Because there's audio dialogue with characters' names in). This was one of the best things about XCOM, so it's not great that it's been removed
- XCOM1 was quite repetitive. XCOM2 solved this with lots of varied mission types. While I like the smaller scale rooms of Chimera, it does make all missions the same again. No matter what you're doing, it's a series of small encounters in rooms with no variety
- The unrest system from XCOM1 is back, but is really easy to manage here. As long as you prioritise getting all the field teams to level 3 ASAP, unrest isn't an issue
- I can't see what gear people have equipped once the mission starts, so I don't know if my shots will tranquilise or kill, or whether firing will end my turn (because the tooltip says "will end your turn" even if you've got a weapon mod that lets you fire twice)
- The game doesn't display names during breach or the bonuses you have
- Your units' turn order is arbitrarily mixed with the enemies (based on breach order). From the screenshots I'd assumed the alternating turn order would be based on some kind of initiative or speed value, which would be more interesting. Similar kind of order to child of light where faster units could attack more often. Unforunately it's just a flat out "equally mix your turns with the enemy's"
- Getting 'lightly wounded' or 'wounded' doesn't make the slightest bit of difference to anything; only getting "gravely wounded" (1hp) has a chance to inflict a scar, which can be healed by skipping one mission
- The whole game is ridiculously easy. Playing on Normal, I barely had to pay attention to loadout and never lost a unit (so I never saw the androids either)

// Bugs
- The game crashed half a dozen times in my 25 hours. Usually this was a minor annoyance that didn't matter because the game kept it's automatic saves that are made after every round. Last night I decided to plough through the last act even though it was getting repetitive, and it crashed after about 3 hours. Came back to it today and all my progress and saves from yesterday have disappeared, so that's it - not bothering to finish it.
- About once per encounter, one of my units is standing in mid-air
- When breaching, I had "Good Visibility" (+chance to hit) AND "Low Visibility" (reduced chance to hit) on the same breach
- Cherub's PHALANX description says "Enemies focus their fire on Cherub, ignoring all other XCOM units at this breach point". What actually happens is that only one agressive enemy will target Cherub and shoot at him, giving one charge. Other agressive enemies will fire at other squad members
- A psyonic enemy used the Darth Vader grip on my sniper. I used Stasis on the psyonic to release my sniper, which worked (as he could move and fire again), but he was still suspended in mid air clutching his throat, which he continued to do while floating around the map shooting at people
- With a top end computer, it takes at least 30 seconds to open the starting window dialogue when you click play, then have to click play again. As far as I can tell, this is because it takes 30 seconds to load the adverts for other XCOM games
- On the city map screen, the unrest indicators for how much unrest will rise in a district regularly just disappear and don't come back until exit the map and re-open
- Reloading a save doesn't work properly. If I reload, it often skips either the character who's turn it was, or enemy's turns. You can also reload an enemy turn to make them miss a shot
- In the "Taking down Sacred Coil" mission, they summon a gatekeeper as part of the opening move. One of my breach bonuses was that all characters get Overwatch after breaching, and I killed the Gatekeeper before it could leave the room. Then at the end of the encounter, Command says "If that Gatekeeper is part of their plan, we should go after it and take it out"