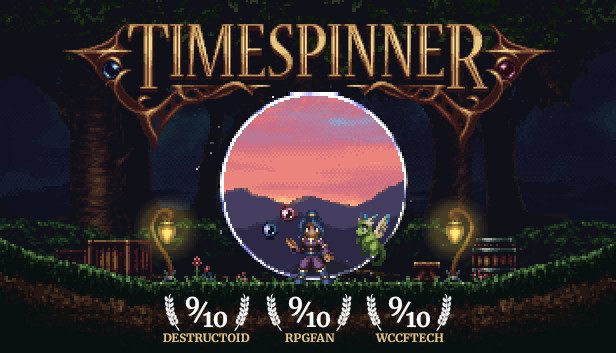 Timespinner is a short, light metroidvania game with some interesting but under-utilised time-travel mechanics. The artwork and animations are beautiful and the music is pretty relaxing. The game starts out pretty strongly with good mechanics and combat but generally trails off towards the end in all areas; combat, exploration and writing. You can pause time, which allows you to freeze enemies in mid-air and use them as platforms. There's a huge range of different orbs to use which modify your combat style, although they're all basically melee apart from a couple more unique ones. I finished it in under 7 hours.

- Although there are a ton of different orbs to find and use, only the fire orb is used a couple of times to unlock areas. They could have made a much bigger deal out of this for the Metroid aspect.
- Fairly good story, lots of things to find and read
- There are lots of flying enemies, so not being able to shoot upwards is annoying (until you get lightning which hits anything in a wide area in front of you)
- While I really like XP and levelling systems in general, it doesn't fit this game; it was way too easy because you level so quickly. The gear system is good and the difficulty could have been controlled better with strength only coming from equipment and orbs, but I don't think levels are necessary in a game like this. Only the first 2 hours had any challenge, after that I steamrolled every enemy and boss
- At the end of the game, you're offered a choice for how the game ends. It would have been nice to see each ending but the game saves after you make the decision and there's only one save slot, so you'd have to replay the whole game to finish it differently. Pretty standard I guess, but I'm not playing 7 hours again to see a different cut-scene
- There are kill/fetch quests like in an MMO, in a short Metroidvania. There are even "Get me one of these eyeballs" quests where the creature has a drop rate, so you have to kill it, exit the level, go back and kill it again until it drops it
- There are several long corridors which are just full of the same enemy equally spaced apart, which feels lazy. Mostly the map is fun to explore but it could have been larger or more interesting
- Most of the characters are either gay or bisexual, the culture is polygamous, the protagonist's mother went to the city to get pregnant with no intention of staying with the father, there's a long dialog about acceptance of a trans character and there's a quest line about helping two gay people get together. None of these things have anything to do with a game about time travel, exploring and killing monsters. It's pretty out of place and obvious that the author was pushing an agenda at the expense of game-play.