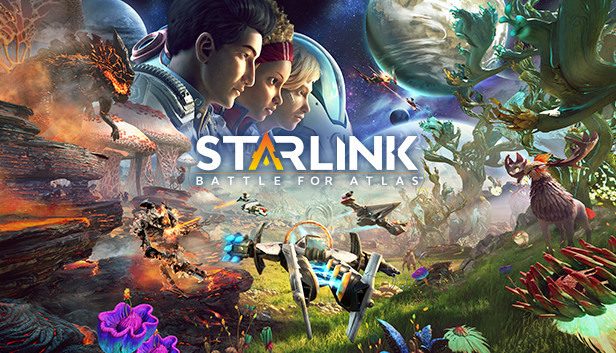 I really enjoyed most of Starlink. The cutscenes and the story are well animated - although pretty sparse. The story is a loose framework to get you involved in the open world side activities which make up the core gameplay. Movement and generally speeding across the planets in your ship feels really good, combat is satisfying (if a bit wonky with a controller) and the sound effects are excellent. Completing all the minor things on the planets is a grind. Considering how high budget the game is, they could have done without re-using the same voice lines over and over. On the whole, I definitely had fun playing it; it's an enjoyable arcade shooter, but it's also repetitive and overhyped.

Ok, so an overall positive review for this, but lots of side things worth mentioning too:
- The core gameplay loop here is 1. Dreadnoughts (spaceships) deploy Primes (large walking machines) to one of the seven plants in the star system. 2. While the Primes are active, they drop Extractors which strengthen the Primes. So kill Extractors, then Primes, then Dreadnoughts. However, unless you deliberately let the ships take over the galaxy, it's pretty trivial to kill all the Primes before the Dreadnoughts manage to deploy a single extra Prime.
- The advertising overhypes the game's systems by quite some margin. I saw several websites talking about 'customising interstellar outposts'. What this means in reality is that you need to farm for either money or materials, and upgrade each outpost to increases you influence on a planet.
- There are lots of things in the game that emphasise it's really a kids game. This is most evident in the way that tutorial messages are played *every* *single* *time* you pick up a collectible or need to deflect a turret projectile.
- There is only one voice line for each interaction in the game, despite those interactions being with dozens of different characters. Each outpost (there are about a hundred in the system) greets you with the same voice line, even though the NPC is different. You greet each output with the same voice line. Every NPC you rescue in the overworld uses the same voice line to thank you. There are hundreds of researchers buzzing around the planets. If I hear one more generic researcher say "Thank you so much! Now I can return to my studies!"...
- One of the things people will have seen about this game is the little plastic spaceships being sold in all the game stores. Thankfully, you don't need to buy any of them to play or complete the game, but you do miss out on roughly half the upgrades if you don't. Again - that doesn't matter as I was ridiculously overpowered by the end of the campaign. I killed the last boss without taking so much as a scratch, in less than a minute.
- I never really saw the appeal of Starfox so don't know much about it, but that doesn't really detract from the game. If you want to play as Fox, you have to buy the Switch version as that character is Switch exclusive.
- I bought this on PS4 as it's really pretty to look at. I own a Switch, but I don't think the hardware would be able to handle the planets as well as the PlayStation.