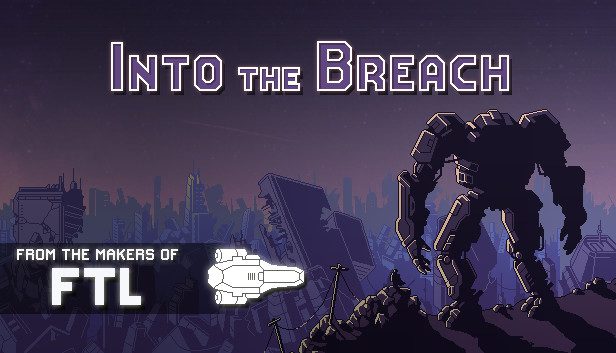 A turn based small-scale strategy game from the makers of FTL. I've been really enjoying this. You control 3 mechs on a series of 8x8 maps against the Vek (bugs) with various objectives on each map such as 'block them from spawning' & 'protect the train'. There are a whole bunch of different mechs, pilots, weapons and configurations you can use to control the battlefield. It's really refreshing to play something like this on a smaller scale where you have to work to the strength of your mechs, combine skills and plan the next move to make the Vek attack themselves instead of you. There's loads of depth, lots of interaction and a very rewarding experience for careful planning.

- Very frustrating when you're sure that you can't make a move, but very rewarding when you manage to think your way out

- On Easy, I barely have to think at all. It's satisfying but a little too easy. On normal it can take me 10 minutes to plan one move, and still die on the second island. I start having the same problem I have with XCOM; I don't like not being able to win cleanly, and on normal sometimes it's not possible to take a turn without losing a building. I'd never play hard mode

- Music is awesome
- From a 2-man team (who made FTL)
- I really like the artwork
- They managed to distil the essence of strategy effectively down to a very small scale, where the board completely changes every move
- Luck can be a factor, especially on Normal & Hard. Some upgrades and pilots way better than others, and some are only good for certain team compositions. You get offered a random selection of weapons at the end of each island, so upgrades are far apart and not always useful