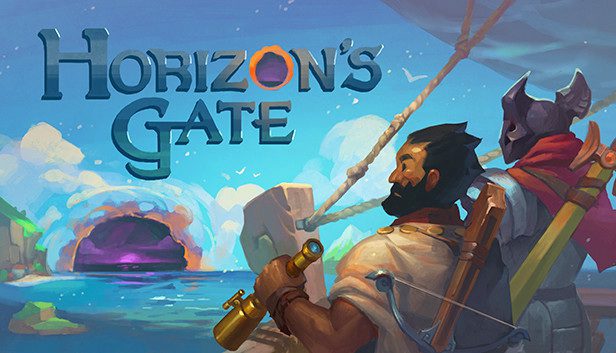 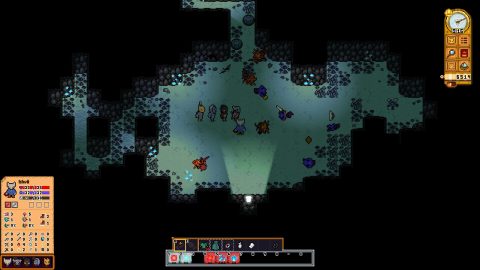 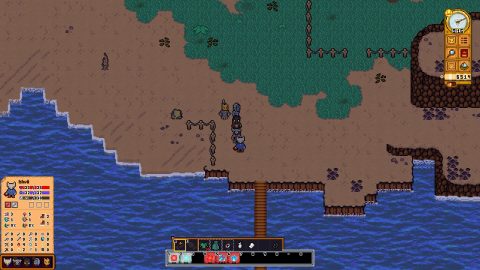 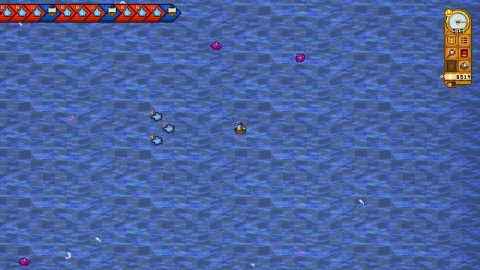 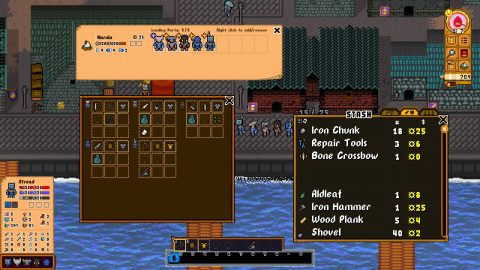 Normally I'd pass over a game like this purely on the quality of the art style, but I'm giving it a fair go based on it winning RPS's Bestest Best award. I immediately found it engaging and would generally recommend trying it if you can push past the mismatched pixel art styles. Behind that exterior is a really decent class and combat system and an enjoyable world to explore, if a little shallow. On the whole, clearly a game that's had a lot of love and thought put into it and I'd encourage them to keep improving. With some quality of life changes, more interesting quests and better artwork, this would really shine.

- You can hire crew and buy ships, outfit them with cannons and attack sea monsters and traders
- Really good combat sound effects
- If you give it time and get past the art style, the combat is good. It's a shame that the combat interface is so ugly, because the abilities are actually very varied and interesting
- Really unique setting for a game (at least for a long time).
- The interface in general is fairly clunky. The way you choose to move and use abilities, moving items into the inventory, interacting with objects are all unintuitive and took quite a while to find how/where to do things
- I love that it encourages you to explore, but the mechanics work a little against that. Ok, the world is about sailing, but most of the sea is empty. You can't go on the land, so that leaves running around the edges of all the landmasses looking for points of interest. Most of those POIs are the same 2-tile jungle map or a few different kinds of caves with random enemies inside. The world is too big to have lots of intersting stuff in. You also have to have enough food aboard to feed your crew, which limits your ability to explore freely and effectively taxes any trading you do.
- I love the detail that has gone into the class system, that you can mix and match, and that they have such interesting abilities. However, in order to learn the more advanced classes, every character has to play as the previous classes first. So if you want to be a Machinist (turret builder) for example, you have to spend time being a sailor, a scout, a rogue and a bombardier first. Bombardier makes sense, but rogue has nothing to do with it. This is even more obvious in the melee tree where to be a berserker, you have to be a monk first.
- Enemy camps don't respawn, which makes it spending XP to experiment unappealing
- Ship combat does respawn, but takes food to farm it, and it only gives 10% xp to your characters
- Most of the pixel art is really nice, but it is rather mismatched in places. The sea is the biggest thing that feels out of place to me; most of the objects and the world are fairly simplistic, but the sea is too detailed.
- Could do with a few more pointers, or at least an entry in the journal for controls and interface - I didn't work out how to equip a cannon on my ship until 5 hours into the game
- I also really like that you're actually rewarded for discovering objects and map data. However, you can only sell research data to 1 researcher in the world even though there's one in most towns (you make an exclusive contract with them) and map data to 1 cartographer. So you have to keep going back to that specific town every time you want to hand it in rather than 'any cartographer' and remember which town that is, as it's not stored in the game