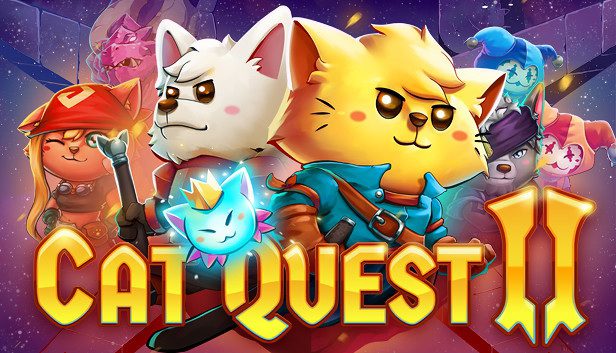 I'm fairly disappointed with CQ2. When I first started playing at release, the UI for managing two characters felt like a mess & combat was a clusterfuck, all because there are now two characters on screen that you can switch between. The effects that's had on both UI and gameplay has been huge, and I don't think any of it has been beneficial. With two characters, the one you're not controlling is casting random spells, obscuring telegraphs and enemies & confusing you as to which character you are. Both characters have different gear and spells which means you're never sure what your abilities are. I hate to say it, but the game is a big step backwards.

I finished Cat Quest five times - and have all the achievements. I loved it. So I'm really sad to downvote CQ2. It adds some cool new ideas, but I feel like the co-op/adding two characters to play as in single player just really ruins the gameplay. I put CQ2 on the backlog for a while, then saw there was a huge update coming (Mew World) with improvements to gameplay and managing the gear for two characters. Now that's out, I don't really feel like it's made any difference at all - the UI for managing the spells and equipment of the two characters is still pretty clunky. Sadly, adding co-op makes playing the single-player version inferior to Cat Quest 1 in every way.

Cons
- Ranged weapons (yeah they add variety, but they also make it easier)
- Even more grinding with two characters
- Same system for upgrading weapons as before - every chest gives you a random weapon. If you already have it, the weapon levels up. So no deliberate progression there