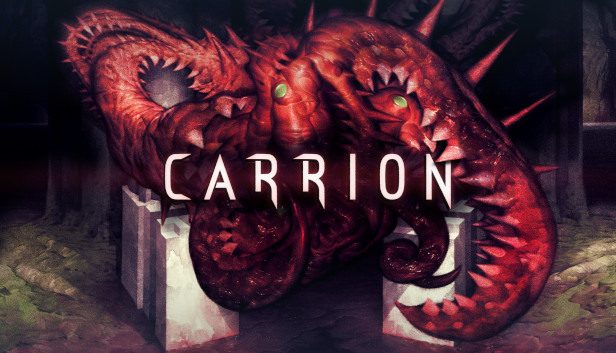 Carrion is an action/puzzle game where you play as the monster. It's 90% lots and lots of fun, 10% moving around aimlessly wondering where to go next in a semi-linear Metroidvania with no map. The movement really has to be seen, screenshots won't do it justice. It's fluid, creepy, dynamic and extremely well done. The sound design is top notch - people scream, furniture and doors clatter around the room, gunfire sounds good. It's about 4 hours long, so €20 is too much. If you see it on heavy sale, definitely pick it - or play it on MS PC Game Pass like I did.

+ Really unique fluid movement
+ Fun playing as the monster
+ Cool abilities and evolutions as the game progresses
+ Some puzzles are based on your size, as you have different abilities depending on how big you are
+ Great background music and sound design
+ It does actually kind of have an ending, it's not just good at the beginning

Literally all the negatives are based on the lack of navigation
- There is no map.
- Portals just say "squeeze in" without any indication of where they'll take you
- The game is relatively linear. You _can_ go back to other areas, but 90% of the time you're moving forward, with a few steps back to open doorways. If they'd included a map, they could have expanded on the exploration aspect by opening up old pathways for new abilities instead of making it linear, but with the ability to get lost
- There comes at least one point in most people's playthrough where they go "Ok, so now I don't know where to go, I can't see where I've been, and I can't tell where to go next" and you spend half an hour randomly teleporting around the map looking for the way forward