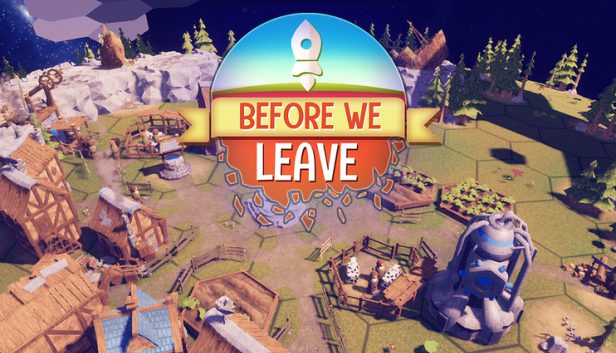 Before We Leave is a really pretty, hex based city builder set when humans emerge hundreds of years after a global disaster and start with the basics again. The models are cute and look like little wooden toys. The music is really catchy and there's loads of attention to detail. Overall, it's very enjoyable although it does fall flat in a few areas. At the start I worried that it would be way too simple, and although it definitely -is- simple, it's got more content than I thought it would have. It doesn't seem to offer that much in the way of replayability though, and it's an Epic Store Exclusive.

+ It's actually really similar to Anno in that each Island on a planet has fertilities, and you can trade resources between islands with boats.
+ You can key bind camera views so you can hotkey between villages
+ Really relaxing. If you run into a serious shortage, workers just stay at home instead of dying
+ Extensive tech tree which requires research on different planets

- It shares the same trading problem with Anno. I always hated Anno's trade mechanics and the boat system always fell short. Supply chains are a lot simpler here though.
- There's also an overpopulation mechanic which for now is basically just "you can never have more than 50 people on an island or they get unhappy". Ok, fine - but in this game people can't die, and they continuously reproduce as long as there are houses available. So once you've got the people, you're stuck with them. They can't die, and you can't get rid of them unless you ship them to another island, which just moves the problem. You can, however, just turn the overpopulation mechanic off entirely.
- Because it's on Epic, no one is playing it, so there's no information like a wiki.
- Tied into the above point, there's a definite lack of information in the game for certain mechanics. For example, I had to go and join the Discord server to find out what overpopulation was and how to fix it
- Resources production and demand erratically go up and down by the second. It would be more useful if these were reliable
- There is a fine line between "casual/relaxing" and "boring". There are no real downsides to inefficiency or shortages, so there's also not much motivation to fix them